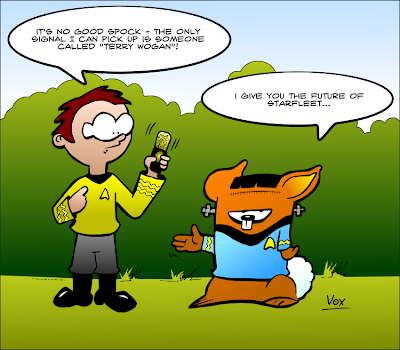 Bet you didn't know Melville & Frankie were Star Trek fans- did you? Mind you, TOS only... :)

Posted by Hypervox at 5:05 pm 3 comments

Yup - the webcomic is finally available - you can find the site at http://hypervox.co.uk/itsalive - you may notice that the next few posts are known to you - let's just say that you've had a sneak preview... :)

Posted by Hypervox at 2:49 pm 0 comments

Yup - my old Hypervox site is currently under reconstruction, in preparation for it's re-incarnation as IT'S...ALIVE! Have a look if you wish - but don't annoy Frankie... 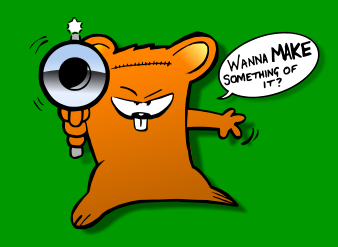 Posted by Hypervox at 4:47 pm 1 comments 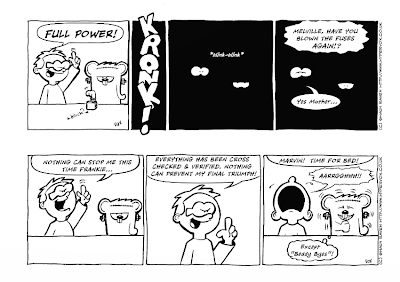 I think I'll do 12 initial strips, and provided I'm happy with the progression, I'll start building a buffer for web release.

Posted by Hypervox at 1:39 pm 3 comments

Things to remember when creating a cartoon strip - 2

Hand lettering is quicker than computer lettering - although it may not look better to start with... :) 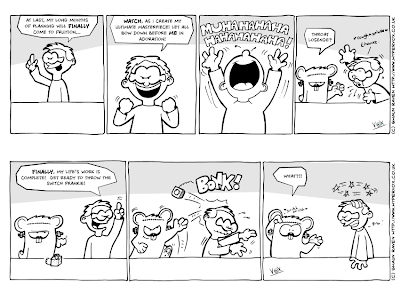 Yup - that's the official title of the comic. Above you'll find parts 3&4, and I've tried a couple of new things here which worked / didn't work.

Let me know what you think people - as I said before, this is a work in progress.

Posted by Hypervox at 1:47 pm 3 comments

If you're having trouble installing OpenSuSE 11.x in Virtual PC, try the following boot options when installing... 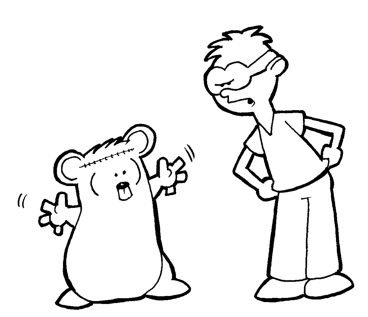 These little guys will be the stars of my comic strip (name to be decided). This is still a work in progress, so the characters and strips will probably change appearance as I go along.

Melville is a ten year old mad scientist type, who likes nothing more than creating havoc from his laboratory (the families outside shed). Frankie is Melville's assistant. Formally his toy rabbit, Frankie was brought to life as one of Melville's experiments. He's a more than a bit miffed by the fact that he has a teddy bear ears instead of his own (long story, which I won't go into now), but he a good sort really, even if he does have psychopathic tendencies... :)

I've completed 2 strips so far, but these are more tester strips than anything else (which also explains the character differences) so don't take these as gospel yet... 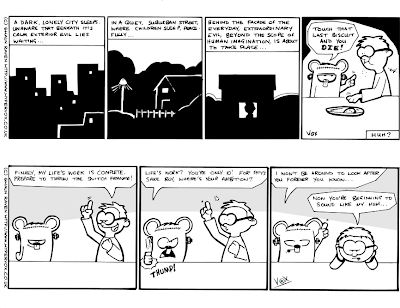 Things I've already noticed: the lettering is horrible - future strips will be lettered in xara. Frankie's bolts need to be drawn before his hands... :)

Posted by Hypervox at 2:10 pm 4 comments

Inking is a Binary Art...

While I've been working on my comic strip (it's coming, I promise), I started thinking about inking. I tried an experiment during the inking phase of the strip - in short, I've used a different pen for inking each strip, and I came to the conclusion that every cartoonist who's created black and white line art has come to eventually.

It doesn't look any different.

Sure, pens can have different thicknesses, they can have differing properties, but at the end of the day, what you're left with, especially if you're trying to get a particular appearance, doesn't look any different. It's black ink, on white paper. Most cartoonists colour their art by computer (that is, digitally), so your black and white image you have created will eventually be reduced to computer data - in short, numbers.

Computers think in terms of numbers. In fact, everything that a computer does, eventually gets reduced to 2 numbers - 1 & 0. A computer brain is essentially a series of electrical switches, which have 2 states, on and off, which are represented by the numbers 1 (on) and 0 (off) - this system we call Binary.

Thinking along these lines, we can say that inking is a Binary art form, where Ink is ON, and no Ink is OFF. Therefore, with my pen, I'm already creating digital art.

So I say this to all cartoonists who's end product is eventually reduced to a computer file. Stop worrying about pens. It doesn't matter if it's waterproof, washable, gold plated, limited edition, expensive, cheap, nice smelling or foul. The art comes from within, not from the pen. Use a pen that you like the feel of, that you feel happier with, and your artwork will show the difference.

Best quote from the election...

...came from my daughter.

Posted by Hypervox at 9:54 am 0 comments