I'll admit it - I'm stuck in the Seventies & Eighties. My main musical influences all stem from around that era, and I've found little since then, to contradict my opinion that modern music is awful. I hold the opinion that music has stagnated since the end of the Eighties, and is now a homoginized product of the music companies who are looking at the "next big thing" to replace "the last big thing" - a never ending stream of the same old acts, that look alike, and sound alike - and that "alike" has not changed for the last decade. Look at any music channel - it's not about new music any more, it's about money and fleeting fame. Just look at X-Factor or the Disney Channel... (shudder)

I was having a conversation with my sons about this on Sunday. My youngest son is a fabulous rock guitarist, and he was trying to find something to listen to on the sky music channels.

"This is ridiculous!" he cried. I asked him what the problem was.

My oldest son (a bassist) agreed, which lead a long discussion, and some amazing revelations. Apart from one or two modern groups, they've started listening to, and appreciating, music from the Seventies and Eighties. I was gobsmacked!

"Because none of the bands sound the same - it's all new and fresh!" So saying, they sat and watched a Thin Lizzy concert, and whilst they laughed at the clothes and poor video quality, one thing was agreed on.

I kid you not. This actually happened. Now to get them hooked on Ultravox.. :)

Posted by Hypervox at 1:38 pm 0 comments

The Unoffical Guide To Enjoying Your Works Bar-B-Que 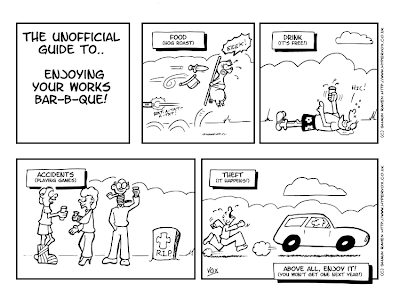 For those who know me, you'll know that all this actually happens! It's worse than blood sports at times... however, we wouldn't swap them for anything. Colour version coming later on tonight. 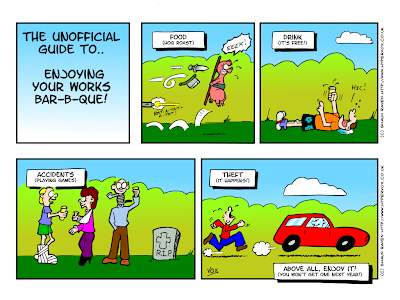 Posted by Hypervox at 4:14 pm 1 comments