Ok - I tried a test this lunchtime - I took a predrawn picture, and tried to ink it in 20 mins, 3 times using different software. Firstly, Manga Studio - now I DO like this program, but it's always a pain getting the settings right. I've found that to get a good inked picture, you have to ink a 1200dpi, and reduce down. Today I took the default settings (600 dpi) and realised my mistake, as the picture was a bit jagged. Secondly, Inkscape - worked well, quite quick, but wasted time on fills - really annoyed me that - but good overall, and slightly better than MS. Lastly - Xara X1 (soon to be replaced in my arsenal by Xtreme 4.0) - worked well, output great. Although It doesn't respond to pressure as well as the other two, I still managed to get a better looking cartoon (and completed more of it) than the other two, mainly because the default line in Xara is better.

Xara then, won by a small margin - we'll have to see how Xara Xtreme does!

Posted by Hypervox at 2:30 pm 1 comments 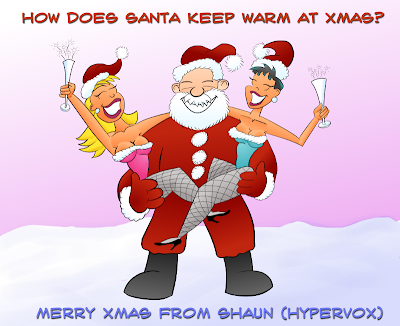 Posted by Hypervox at 1:25 pm 0 comments

...and still working for the same company (at least for the moment). Lots has happened since the last post, some good, some bad. On the good side, I still have a job, but on the bad side, one of my best friends is about to loose his. We've worked together for 8 years, and knowing that he'll be gone next week is just SO wrong. Good luck Chris & Sonia - let's make sure we keep in touch.

To others I've worked with, I also say good luck, and I hope things work out. Keith (Hunkster) , make sure you send me your email if you change it :) and Manik, I'm available if required...:)

Posted by Hypervox at 2:29 pm 2 comments 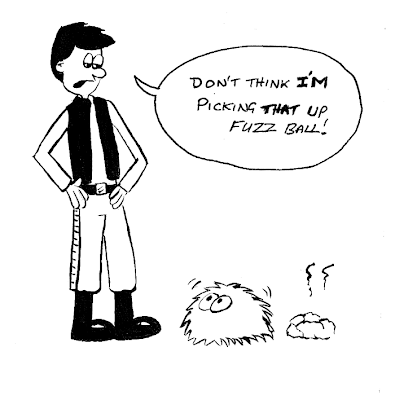 Just a quickie today. This is Crash, and a little furry friend called Errol...

Posted by Hypervox at 1:33 pm 0 comments 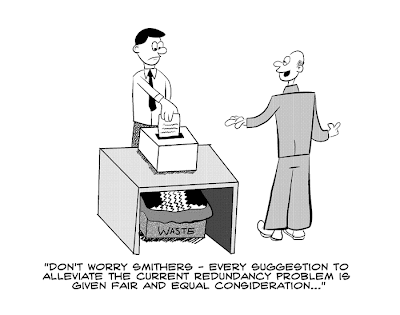 Yes - I could be made redundant soon, so I thought I'd make a cartoon about it to make me feel better. To all of us in the same boat, lots of luck... :(

Posted by Hypervox at 2:10 pm 0 comments 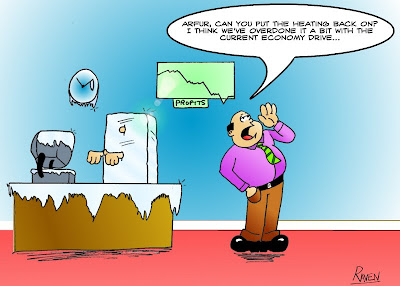 Just a cartoon that reflects some of my work aspects. My character "Colin" (in the pink shirt) is much like me....

Drawn and inked on A4 paper, coloure in GIMP...

Posted by Hypervox at 1:42 pm 0 comments 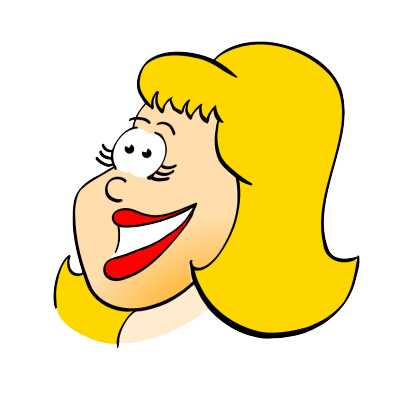 This is a quick color render of Teeah, drawn entirely in InkScape. I'm comparing InkScape with Xara X1 at the moment, and there's not a lot to choose from... 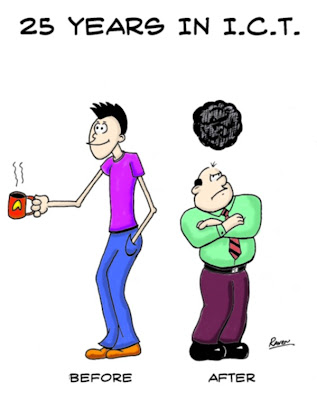 Image says it all really (yes, I'm the one on the right!). 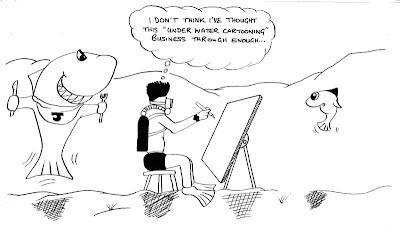 Wilbur at CCGB thought that underwater cartooning might be a good career move....

Posted by Hypervox at 1:36 pm 0 comments 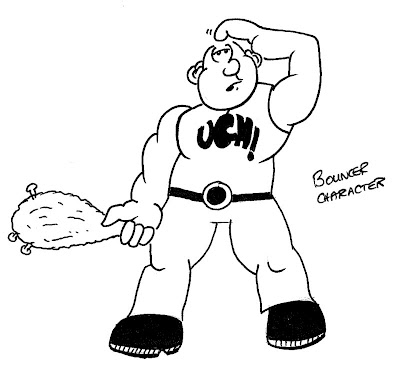 Everybody, meet Twinkle.
Twinkle works in Beryl's Bar, as her bouncer (although in his case, splatter would appear more appropriate). I had this vision of a classic , but slightly bewildered thug, but Twinkle is evolving in front of my eyes! As I look at him, I see him quoting Shakespere, so perhaps he'll be a very well educated thug!
In the above drawing, I can just see him saying "...but darling, what's my motivation for this scene?" In "Crash"he'll be a recurring character, and hopefully a popular one too.
This was drawn using my trusty Tradio, over a green pencil sketch.

Update: Just noticed that the arms have the wrong line order - I've drawn them so that the muscles appear closer from the top down, not the other way around: Note to self, watch out for that in future....

Posted by Hypervox at 1:41 pm 0 comments 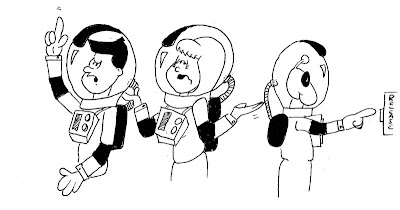 Here's some more character work from "Crash". On the left is Crash himself, with Teeah looking on, and Krip about to make things interesting. The above was made using my current favourite tools (2mm green lead clutch pencil, 2mm hb lead clutch pencil, Rotring Artpen (f nib) and Pentel brush pen, loaded with FW Acrylic ink. I've found that with this setup (plus some Staedtler technical pens) I can get close to what I'm after, although I still have some way to go...

Below is Beryl, Crash's local barmaid and landlady.... 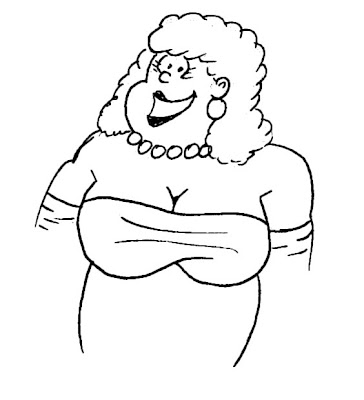 Posted by Hypervox at 1:43 pm 0 comments 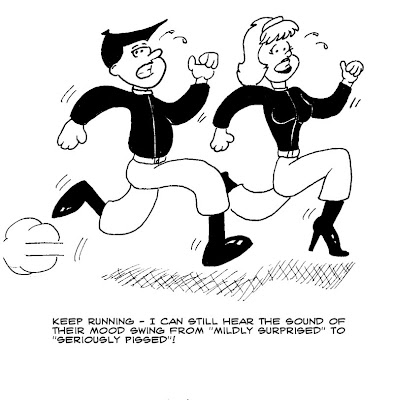 Thought people would like to see how my latest cartoons are progressing. Meet Crash Colon - space adventurer and part-time waster. With him is his second in command, Teeah and both are trying to get back to their ship, Ethel (don't ask).
"Crash" is an idea I've been thinking about for quite a long time, but only now do I feel confident enough to attempt to draw. I've got a long way to go, but I think it shows promise... ;)

Posted by Hypervox at 1:45 pm 0 comments 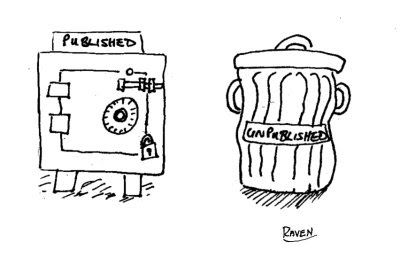 Just a quick cartoon - there's a discussion on CCGB about what you do with your published / unpublished work...

Sorry for the delay...

... but I've been on holiday recently. I have several cartoons nearly ready, which will be put up sometime next week. Keep watching!

Posted by Hypervox at 3:20 pm 0 comments 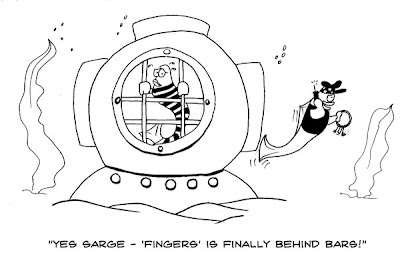 Really had fun(!) with this one. It took ages because I tried to do it digitally, and although I found some part easy to do, I couldn't get the drawing side right, so in the end, I went back to traditional methods.

If I did this again, I would make the background of the helmet black, and not fill in "Fingers" stripes. Expect to see more coming soon, as I've bought some more pens.....

Posted by Hypervox at 1:48 pm 0 comments 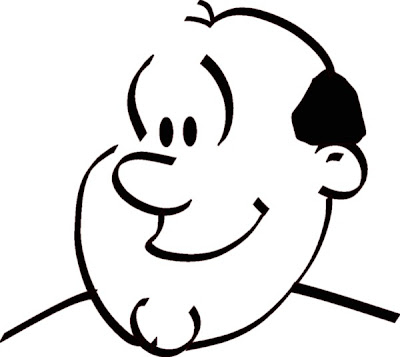 I tested out InkScape at lunch today, to see if it was any good at inking. Actually, that's a lie, because i know it is, as I've used it previously - the only problem I had with it was that it could be difficult to use... Not any more.

Two additional features have been added to the latest release (0.46 at the time of writing) which make inking easier, as well as some additional options. The first is changes to the calligraphy tool, which now has a mass option - this basically slows down your drawing movement, which helps promote a smoother line. The second is the tweak paths tool, which allows you to push and pull paths in a magnet like fashion - great for fixing small inking errors.
One other thing - the preferences are better. I used to use the "simplify paths" option, which removes extra nodes from a shape, but I always found this was too vigourous. There is now a preference setting which controls this, making this option less of a hit and miss affair than it used to be.

For best results, set calligraphy tool mass to 0.10, simplify to 0.0030, and use a graphics tablet. The above picture was drawn using only a mouse - the graphics tablet makes it look even better!

Quick tip for GIMP users - when cleaning up a scanned cartoon (B/W), I've found the best way is to convert the cartoon to a greyscale image, and then run the NL filter (under the Filter->Enhance menu). You should use "Alpha trimmed mean" and set the radius fairly high - this gets rid of the white speckles you can get!

Posted by Hypervox at 1:51 pm 0 comments Almost certainly been done before - but I liked the idea of having a go. Inked using a dip & brush pens, lettering in Paint Shop Pro.

as you may have guessed from my previous post, I'm a bit peeved today. I thought I had a great gag, but then spoiled it with a terrible drawing (all because the size ws too small). As with a lot of my drawings, the idea sketch seems better than the actual drawing - probably thinking about it too much again.

The jury is still out on the pen debate. During my lunch hour, I use a Pentel Tradio for my inking, which works well, unless I'm in a hurry (which I usually am). I may well try inking using OpenCanvas at work, and see how it goes.

As for the gag, perhaps a cartoon showing the car careening into the water might be better...

As you are probably aware, you actually failed on your emergency stop... 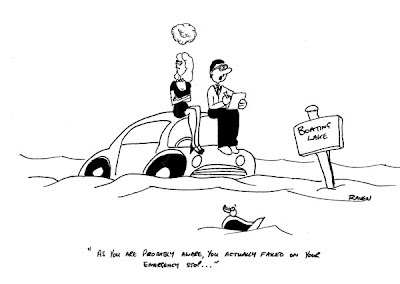 Not one of my best efforts, as I drew the thing too small, but here ya go anyway...

Posted by Hypervox at 1:49 pm 0 comments

Marvo caught on the hop! 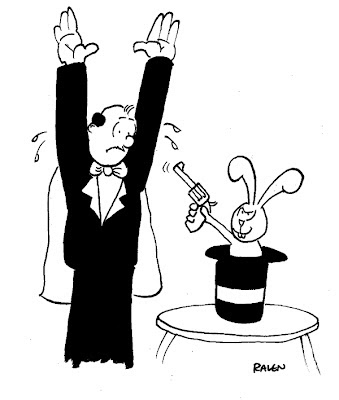 Just when poor Marvo thought life couldn't get any worse...

Posted by Hypervox at 2:59 pm 0 comments

Marvo and his vanishing Rabbit 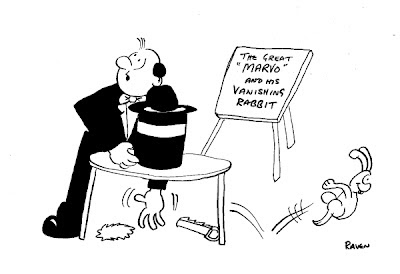 Could be a bit of a theme starting here, as I have several cartoons featuring "Marvo" (yes, he does look a little like Me - or is that the Rabbit?)

Posted by Hypervox at 2:42 pm 0 comments

I'm so glad you rescued me! 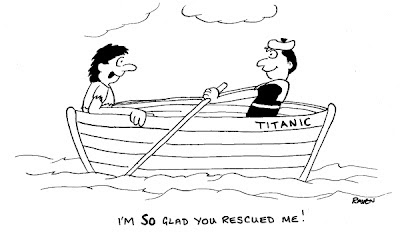 Just a quick flash of inspiration this one - I hope it's original (I certainly don't remember seeing it anywhere).

This was drawn using a dip pen (manuscript drawing nib) and fw acrylic ink (god it dries fast). Thanks to the guys on the ccgb website!

Posted by Hypervox at 2:36 pm 0 comments 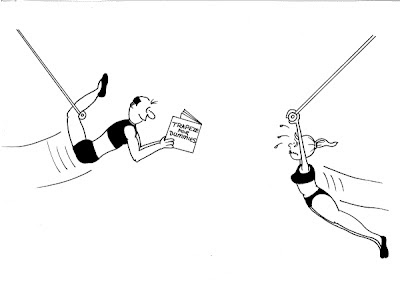 Well, this is my first proper cartoon. Let me know if it rings the right bells...

Posted by Hypervox at 2:32 pm 0 comments

In no Particular Order....

My style currently falls somewhere between Maddocks & Banx I think...

Posted by Hypervox at 3:59 pm 0 comments

Hi everyone, I'm back!

Not that I've actually been away you understand, but my focus has changed - my goal now is to be a cartoonist, and this blog will hopefully document that progress...

Posted by Hypervox at 3:44 pm 0 comments